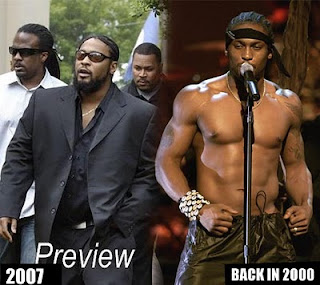 ST has confirmed that singer D’Angelo has pleaded not guilty to charges that he solicited a prostitute. D’Angelo, who's real name is Michael Archer, was arrested this past Saturday (March 6) in NYC's Greenwich Village for propositioning an undercover officer for sex in exchange for $40 bucks (didn't know it was on sale).

D'Angelo has proclaimed his innocence and says his focus is working on a new LP which is suppose to be out this summer. If he does get his project completed, it would be his first in 10 years (something about the dime mark in years. Sade, Reflection Eternal, now D''Angelo). D'Angelo's last album, Voodoo, was a career milestone, selling over 1.7 million and earning a Grammy for Best R&B album. In 2005 he was arrested twice, pleading guilty to DUI, marijuana, and cocaine possession charges.

A hearing for the prostitution charge has been set for May 4.Until then, let's not be quick to judge D'Angelo based off of his past criminal history. I mean in all honesty, does D'Angelo really have to pay for sex? For $40 bucks? Something is not correct here, but hey we just bring the story.
Posted by Cheebs at 7:47 AM