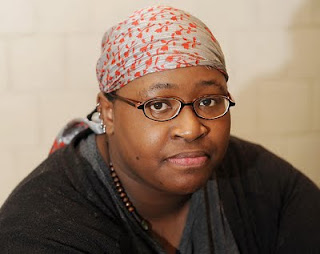 This is an excellent read for anyone who read the novel PUSH by Sapphire and is planning on seeing the upcoming film, Precious staring Mo'Nique.

NY Daily News Reports: The Queens woman who mutilated her father and burned his penis on the stove has been taking a cooking class in jail.

Brigitte Harris, who faces up to 15 years in prison for killing her dad when she is sentenced on Friday, also has been biding her time on Rikers Island by reading vampire novels and mysteries.

In a jailhouse interview with the Daily News, the soft-spoken, crucifix-wearing woman said she never intended to murder her father, Eric Goodridge.

"Thinking back now, I definitely would have tried to put my resources into getting him put in jail," she said. "But I thought that people weren't going to believe me."

Harris, 29, who claims her father started raping her when she was 3 and had sex with other underage girls in Liberia, said she acted after learning that Goodridge was taking his granddaughters back to Africa.

"There was no way I could let it continue," she told The News. "I did it because I couldn't let my sister's children go through that."

Prosecutors say Harris lured Goodridge to her apartment two years ago, handcuffed him to a chair and stuck a towel in his mouth. He choked to death.

Harris told the court she cut off his penis with a scalpel and cooked the evidence after researching the John Bobbitt case and discovering organs can be reattached.

"I don't know why I didn't take the towel out of his mouth," she said of Goodridge. "I didn't want him to hurt anybody else."

Harris said that she has met lots of women in jail who have told her their tales of parental sexual abuse.

"I try to tell them that if they did it to you, they could do it to someone else," she said.

Harris said she told her sister, her aunts and other relatives about Goodridge's abuse, but they refused to believe her.

One aunt, she said, told her, "No matter what he did, he's still your father."

"The people who did know me should have known I wasn't lying," she said. "They knew me. They knew I wasn't that type."

Harris said she wishes now she had gone to someone other than family members for help.

"You can't run away from it," she said. "You have to tell somebody. I was anti-social."

Defense attorney Anthony Aidala, who represented Harris pro bono, said seven jurors have written Supreme Court Justice Arthur Cooperman, asking him to sentence her to time served so she can get psychiatric help.

"I've spoken to judges, prosecutors and defense attorneys, and nobody has ever heard of jurors doing this," he said.

Harris said she's not sure what she will tell the judge, but she says she hopes her case will shed more light on sex abuse in the home.

"People need to start talking about it," she said. "People don't want to believe it happens. It's too gruesome."

tzambito@nydailynews.com
Posted by Cheebs at 7:27 AM

WOW!!! I read PUSH and I must say, though I don't have any personal experiences, I do have a friend who have experienced their older siblings and uncles taking advantage of them. However, I can say she never let that hold her down and she kept PUSHING and now she is a teacher in her hometown of Brooklyn.

some people mind frame do not allow them to go on as we can see in brigtte harris case. i'm so sorry for what has happened to brigitte and some times people just do what they have to. in her case she took the law into her own hands. and people should'nt have anything to say unless you are in those shoes but at the same time everyone handles things diffrent.

brandy, from los angeles let brigitte harris go she has went through enough it's like being raped by the system. well brigitte i hope that everything gose well in your life just keep the faith that God will bring you out.

In this country WE condone the rape of children. We run around goo goo ga ga over someone having a baby and turn our heads on the fact that not all humans should be able to procreate. Brigitte should not have had any shame. The rapists should be the ones who are shamed and tortured and mutiliated since the 'system' fails to hold them accountable. Brigitte's father should have been killed much, much earlier by someone in the family.
And, her sister is NOT her friend. And, desperately needs counselling. Why do victims CONTINUALLY allow the rapist access to their own children. If the father would rape is own child, he sure will rape is grandchild.

So, Colleen GET counselling bc if you allow a rapist access to your children routinely, you will also allow inappropriate boyfriends and men around your children. They deserve BETTER and you know it. Please get counselling...if not for you; then for your children.