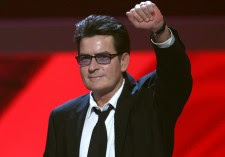 Couples have disputes and couples have arguments. However when violence is involved in a dispute, this dispute now becomes a crime. By now most of you have heard about Charlie Sheen's domestic dispute and I'm not going to say I know what happened. However facts are facts and fact is Charlie was arrested and released on bond. Allegedly Mr. Sheen brandished a knife at some point and children were in the home at the time.

From my past experience in Child Protection, I know Mr. Sheen will have to stay away from his wife until the court date. Anytime there is domestic violence and children are present, child services must do their own interview independent from police. Child protection has a different angle as to the safety of the children in the home. Counseling is a must! I'm sure their intentions were independent of their children, but children just being in the home when two adults have a domestic dispute involving violence is a crime. It's called neglect.

Now here is my other question, why am I still seeing Charlie Sheen in commercials with Michael Jordan about some boxers? When I compare this to Tiger Woods the question just pops in my head. Tiger didn't break any laws and was not arrested. Tiger walked away from his domestic incident and there wasn't any reported violence in his situation on Tiger's part. Some reports say Tiger's wife slapped him, but who knows. Police weren't called to Tiger's home. His wife was not in fear of her life, so I ask the question again, why am I still seeing Charlie commercials? I’m just asking a question to make you think.
Child Services is &#8220;Aware&#8221; of Charlie Sheen&#8217;s Domestic Violence Arrest
Posted by Cheebs at 8:52 AM

He's white/hispanic, whateva. He has a lighter shade than Tiger. That's why we still see his face selling drawers.