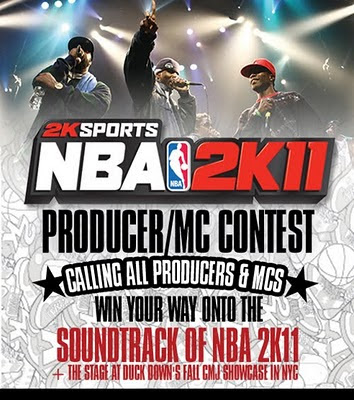 Duck Down Music and 2K Sports have partnered to present an exciting contest for all aspiring producers and MCs to create unique and original music, along with the special opportunity to have their song included in the upcoming soundtrack for NBA®2K11, the next iteration of the hugely popular NBA 2K series.
Phase 1: NBA 2K11 Producer Contest (CLOSED)
On March 8th, producers had two weeks to create one sample-free instrumental. Over 500 submissions were sent to nba2k11@duckdown.com.

The overall winner was selected by the general public, who had two weeks to vote for their favorite instrumental at: www.duckdown.com/nba2k11/producer.

Today, we would like to congratulate Bay Root Productions, from San Antonio, TX, for being the winning producer, receiving 47% of the votes. Over 200,000 votes were cast during the 2 week voting period.
Bay Root's instrumental will now be used for Phase 2 of the NBA 2K11 Producer/MC contest.

Phase 2: NBA 2K11 MC Contest (OPEN)
Starting tomorrow, April 6th, MC's will have four weeks to submit one clean track using Bay Root's instrumental.
All submissions must be sent to nba2k11@duckdown.com by May 4th.
After the top ten songs are determined by Duck Down Music and 2K Sports on May 4th, they will again be posted via a link on www.XXLMag.com for fans to hear the tracks.
The winner will be announced on May 11th.
The grand prize winners of the contest, which will consist of one producer and one MC, will have their song placed in the music soundtrack for NBA®2K11. In addition, each winner will receive an all-expense paid trip to New York City, where they will have the special opportunity to perform the song live at Duck Down's CMJ Showcase in October 2010.