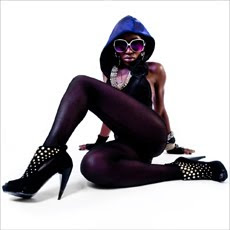 I first heard this D.C. native on a Raheem Devaughn Mixtape and was like, “Who is that?” When Rah D gave his shout out to YahZarah on his mixtape, I went to do my research. Comes to find out I’ve been listening to her voice for a minute. YahZarah was the female voice of most of The Foreign Exchange tracks and as a background singer for Erykah Badu. YahZarah attended NC Central in Durham and while she was there, she hooked up with several artists in the Raleigh-Durham area including Phonte’ of Little Brother. Phonte' of course had YahZarah singing many vocals on the FE’s songs and was one the major influences to have her pursue a solo career.


This album, The Ballard of Saint James is an awesome piece of work and an educated ear can hear the FE influence even in the different styles the YahZarah brings. Yah has a beatiful voice, can hold a cord, blow a ballad, and one can tell her poetic skills are off the hook. Listen at the jumplink, support good music.
http://www.theforeignexchangemusic.com/2010/03/the-ballad-of-purple-saint-james.php
Posted by Cheebs at 7:48 AM