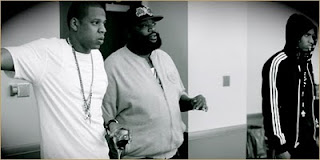 So Rick Ross' name is hot on the streets right now. It seems that the streets were in love when Rick Ross came out and who didn't like, "Everyday I'm Hustling

"? Not too long after the fame, word got out to the streets that Rick Ross was an officer. Things were said about him on the net from rappers (50) and fans, but street cred for an emcee with his subject matter is, um well its necessary. You must be street to rap street in order to be successful at it, Real Talk.

Fast forward now and the streets are starting to give Rick Ross back some credibility with his new joints leaking all over the net. This joint here, "Free Mason" has the streets talking as the song features Jay Z. All talking aside though, good music is good music and Rick Ross is doing just that, putting out good music. So if you're one still hating on Rick Ross, give this track a listen, and if you're still hating after that, download here for FREE and share with your friends.
RickRoss-FreeMason(FeatJay-Z) by skelletop
Posted by Cheebs at 10:32 AM