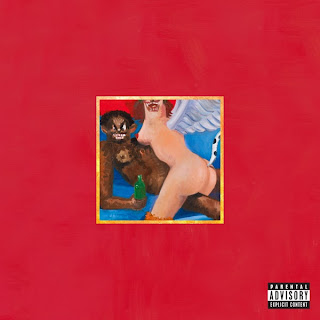 "Banned in the USA!!! They don't want me chilling on the couch with my phoenix!"-Kanye West

Okay, so Mr. Controversy is at it again, but an Island Def Jam record company executive speaking anonymously with the Times said that while the company "strongly urged" West to use alternative artwork, it was never outright banned. Allegedly, Kanye "was told if he wanted to do it, the label would stand behind him." However, the label isn't sure the image in question would be sold in certain stores, thus putting into question future album sales. His album, My Beautiful Dark Twisted Fantasy

is scheduled to drop 11/22, so we have time to see what graces the cover of his CD. As for me, I am a lover of art, but some art doesn't belong everywhere and this art surely does not belong on the cover of any album. Just my opinion, what's yours?
Posted by Cheebs at 9:40 AM