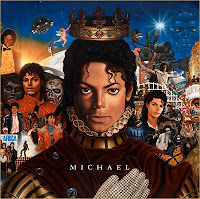 Okay, so we get a peek at Michael Jackson

's first single, "Breaking News", off of his posthumous release, MICHAEL which drops December 14th. All of the songs on the

album are previously unheard material. No. We don't have a leak yet, but keep your fingers crossed. However, Sony

did release the cover art today, which is a Kadir Nelson

painting. Look closely at the many faces of the King of Pop that Nelson captured for what will be a CLASSIC cover. Good work Kadir.
Posted by Cheebs at 2:16 PM