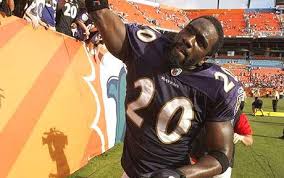 The brother of Baltimore Ravens' safety Ed Reed is missing after jumping into the Mississippi River sevral media outlets are reporting. Police from the St. Charles Parish Sheriff's Office had been chasing Brian Reed, 29, in St. Rose, Louisiana  as reported by WWLTV.com in New Orleans.

"The suspect jumped into the river, went about 15 feet according to the deputy," Sgt. Dwayne LaGrange, a spokesman for the St. Charles Parish Sheriff's Office, told WWLTV.com. "At some particular point they said he did witness hands and head come up and go under the water and never resurface again."
The Ravens play the Kansas City Chiefs tomorrow. Ed Reed is expected to play by saying, "My brother loved football. He would want me to play." Our prayers are with Ed Reed and his family.
Posted by Cheebs at 1:05 PM