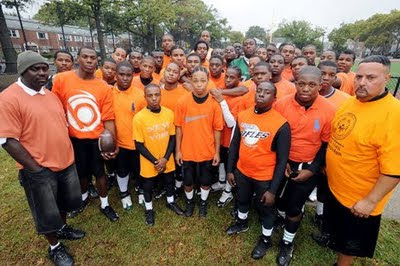 About 3-4 years ago I was living in NY in Elmont, LI. Elmont is one of the first communities on Long Island and I would walk over the freeway which separated LI and Queens to catch the Q4 bus on Linden Blvd. Well this particular morning on my way to work, I notice a lot of police cars and helicopters were in the area and in the air. NYPD from the 105th precinct were harassing the black males on the Southside of Queens. I called my sister who is a detective and asked her why the police copters were in the air. She informed me a police officer was shot near Laurelton Parkway Park. Rumor was the officer saw a black male smoking marijuana in the park and shouted, “Hey”. The young black male allegedly pulled out a gun and the officer allegedly shot himself in the leg pulling his gun out of his holster. The young male got away. Reports came back later on that there wasn’t any young black male smoking marijuana in the park. The cop just did a ‘Cheddar Bob’ or a ‘Plaxico’ move. However because of this cop’s mistake, officers were on the grind harrassing young black males in the Cambria Heights, Laurelton, Jamaica, Rosedale, and Laurelton areas looking for a guy on the run who pulled out a gun on an officer.


This past Friday a young black male Kevin Miller was murdered not too far from his school in Queens during after school hours. NYPD from the same 105th precinct wanted desperately to find the person at the other end of the murder weapon. In doing so the police arrested a honor student athlete from nearby Campus Magnet HS. As I remind people in my blog that, “It takes a village (us) to raise a child”. Being a person of Southside Queens I have a lot of connections to Campus Magnet High School. The school formerly known as Andrew Jackson HS or ‘AJ’ as we called it in my days of coming up. I use to coach against AJ’s coaching staff when they coached the Springfield Rifles and I was part of the coaching staff for the Rosedale Jets. Recently Coach Barnett and Coach Rufus assisted me with bringing one of their top players to the HBCU School that I recruit for. Coach Barnett and his staff do an excellent job in a tough area of Queens as Campus Magnet HS is in Hollis, Queens. I've worked with Barnett, Coach Rufus and their staff over the years and I must say they are stand guys and do a stand up job at Campus Magnet.

Well during the outrage in the community from the afternoon events, one of Coach Barnett players was falsely arrested and police would not listen to Coach Barnett and his staff as they tried to explain the player’s whereabouts at the time of the shooting nearby the school. It always puzzles me why does false arrests happens in our community at an alarming rate. Read about this story here……
http://www.nydailynews.com/sports/high_school/2009/10/03/2009-10-03_high_school_arrest.html

the more i tink abt it the more i get upset,because it really is ignorance from our law enforcement.


mayne im so tight i wana post much more but i believe iwill say something thas really not ment to be posted. i was juss a senior last yr @ AJ and thier used to be officers patroling that same area ,so u tell me wut makes it any difference not to patrol this yr...smh

hint::the man is 6'6 , wit a bright ass orange shirt dnt u tink the world would have seen him blast a pistol...?