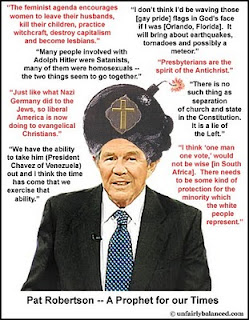 I don’t care if this guy is in the ministry. I don’t care about this guy’s title. He puts his pants on one leg at a time just like I do. Therefore, he is entitled to get whatever responses he gets. This is why I hold the words, “Too much of anything makes you an addict” very close. Religion is very personal in my opinion and it’s idiots like this that have a following, because their followers have too much religion and are unable to think for themselves.

This guy is not a spokesperson for God as many people in the ministry think. Religion is a faith or another word, belief. If there is faith and belief involved, then that means there are no correct answers when it comes to religion. Reason is because nothing is factual and it deals totally with faith and belief. This guy is an idiot, jerk, stupid, moron, and any other adjective you want to call him. He’s entitled to it. This is not a man of God and this is America, so you have the freedom to believe in any idiot you want, but this should be the final pull on the plug for this guy, but it won’t.

He’ll still go on fronting on television like he is so holy, but in actuality, well, this is America and if you want to believe in this clown, then the choice is yours. Click the link below to view his comments on ABC.
White House Adviser Valerie Jarrett 'Speechless' Over Pat Robertson's Haiti Comment - ABC News
Posted by Cheebs at 11:15 AM