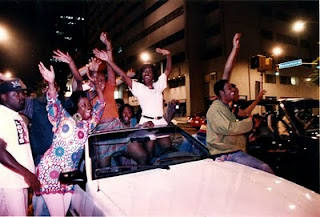 Freaknik was Spring Break for the black collegian in the late 80's and early 90's. Unofficially the last 'real' Freaknik was in '94 and I'm glad to say I was part of the fun and tradition. I remember taking into account what was important to me as a senior college student, so that I can make it to Freaknik. My roommate and I looked over our bills and decided that we didn't need cable, we were going to pay half of our phone and light bills, and  hustled up a few bucks so we can 'front and floss'.
My crew drove from Houston to Atlanta in my man's Hashim's jeep and jammed Nas' Illmactic casette tape most of the way. Illmatic had just dropped and was the hottest thing on the streets at the time. My crew consisted of Hashim who was from Dallas by a way of Harlem, Jamal aka J-Rule from Chicago's southside, Neil G the Alpha from Jersey who is now a lawyer, and myself-The Southside, Queens representative.
We met college people from all over the country who came to Atlanta to release some steam and have some fun. Of course, since it was 'Freaknik' and the stripclubs in Atlanta goes hand in hand with the theme, there were plenty of FREAK in the Nik, but the car jam down Peatree to get to the park, was the best car jam in my life. It took us 20 minutes to go a half a mile, but did we care? Not at all. We were college kids on break and a CARE was the last thing on our minds.
The rest of the stuff will stay at FREAKNIK. We had fun, came back to school, and a couple of days later our phone was cut off, so was our cable, and we received a 'cut off' notice for our lights. None of that mattered, because it was all worth it to get to Freaknik and have a story to tell for the rest of our lives. 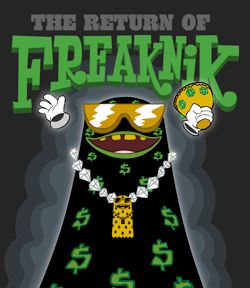 Now if you weren’t fortunate enough to attend FREAKNIK, well it’s like a big pot of Gumbo that consists of Mardi Gras, Daytona Beach, and a Howard Homecoming all mixed up. If you have an imagination and that mind can somehow put that combination in a bowl, you'll have FREAKNIK. I recently saw T-Pain's cartoon called "Freaknik: The Musical", but this cartoon is not for kids. The show premiered on Cartoon Network's Adult Swim, detailing T-Pain and his group's quest to "successfully resurrect the spirit of Freaknik ... the biggest spring-break party known to man." Only thing I can say is, COMEDY!!! Check out the actor voices in the preview below and check out the cartoon on the Cartoon Network.