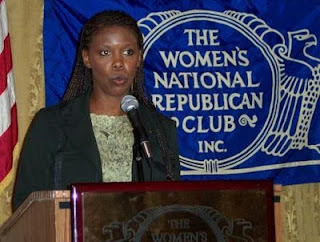 Sarah Pain politics is like a deer caught in a car’s headlights, clueless. If you think that Sarah Palin and her followers only endorse white Republican far right wingers, well check out who she’s endorsing. Palin is enodrsing black Republican candidate Star Parker

. Parker is running for Congress in California and recently gained the endorsement of America's favorite clueless former vice presidential candidate.


Parker is challenging Rep. Laura Richardson (D-Calif.), an incumbent and member of the Congressional Black Caucus, in a district where the demographics have shifted away from the traditional CBC constituency over the last decade.

California's 37th Congressional District encompasses Long Beach, Signal Hill, Carson, Compton and parts of Los Angeles. The district is highly diverse ethnically, with almost half its residents being of Hispanic decent and a quarter African American. Click here to learn more about Star Parker.
Posted by Cheebs at 8:32 AM

Go Star Go, we need real change not a crock thats there now incumbent Luara Richardson!
who has a few ethics problems. one foreclosed home in Sacramento and two other properties with foreclosure notices in southern California. Dont forget the Joy ride she did with her 19 staff flying on helicopter over the district for $20k with the taxpayer money!!.

Thanks for your comment. You must be from California to know so much about this race.

Go Star and Sarah. Saw your interview on TV and glad to see that you are running for Congress.