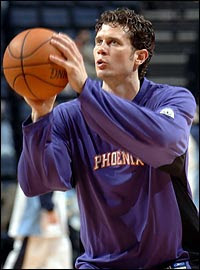 Former NBA journey man Paul Shirley was recently let go from his freelance position at ESPN, because of his outlandish comments about the victims of Haiti. Shirley comments were posted on flipcollective.com where the former NBA journey man stated his reason for not joining millions of people with aiding the people of Haiti. Here are his comments:


"I haven't donated a cent to the Haitian relief effort. And I probably will not."


"I haven't donated to the Haitian relief effort for the same reason that I don't give money to homeless men on the street. Based on past experiences, I don't think the guy with the sign that reads "Need You're Help" is going to do anything constructive with the dollar I might give him. If I use history as my guide, I don't think the people of Haiti will do much with my money either.


... Shouldn't much of the responsibility for the disaster lie with the victims of that disaster?"


"Shouldn't there be some discourse on how the millions of dollars that are being poured into Haiti will be spent? And at least a slight reprimand for the conditions prior to the earthquake? Some kind of inquisition? Something like this?:


First of all, kudos on developing the poorest country in the Western Hemisphere. Your commitment to human rights, infrastructure, and birth control should be applauded.


As we prepare to assist you in this difficult time, a polite request: If it's possible, could you not re-build your island home in the image of its predecessor? Could you not resort to the creation of flimsy shanty- and shack-towns? And could some of you maybe use a condom once in a while?


The Rest of the World

Now Shirley hails from the earthquake capital of the United States, California. I don’t know if he personally knows anyone affected by a natural disaster, but it is human nature to assist those in need. I’m not going to judge this guy, but I will say human……well I’m sure this guy wouldn’t feel this way if it was his hometown and people who he knew lost everything. The people of Haiti have a strong faith and WILL get through this with or without people like Shirley. Kudos to ESPN for releasing this guy. There are plenty of humans with feelings who can do his job and can probably do it better.
Posted by Cheebs at 4:20 PM

Can we just all get along? This guy is very ignorant, very insensitive, and just down right stupid. He is the definition of a HATER. You're correct, Haiti will survive without him.

What an asshole. He can keep his dollar if he wants it that bad. Just ignorant. GOD bless him though.