The Southwest Athlectic Conference will honor Steve McNair this football season by having all 10 teams wear a #9 sticker on their helments. 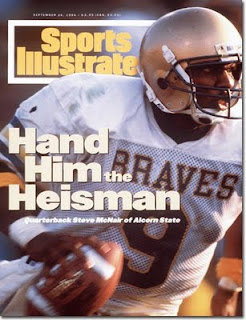 http://www.baltimoresun.com/sports/ravens/bal-steve-mcnair-tribute-0831,0,6858542.story
I remember the Alcorn State vs. Texas Southern games during my college days at TSU. I saw some great SWAC games and was a fan of the friendly compitition in the conference. I am blessed to have seen this great player during his college days and anyone who saw Steve back then will tell you he was the BEST QB in any conference at the time. Only two quarterbaks were taken in the first round of the 1995 draft. McNair was the first QB taken and the third overall pick by the Houston Oilers (A SWAC city). Kerry Collins was the other QB drafted in the first round as he was a Carolina Panther with the fifth pick.
Posted by Cheebs at 9:30 PM