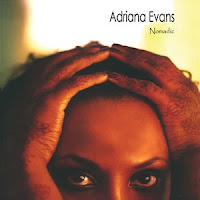 The 'Top will support our Neo Soul artist, because we know radio won't. Singer Adriana Evans was born and raised in San Francisco, California. Her mother, Mary Stallings was also a gifted jazz vocalist who sang with Count Basie, Dizzy Gillespie, Cal Tjader and released several solo records. At 18, Adriana relocated to Los Angeles, where she met rapper/producer Dred Scott whom she collaborated with on his 1994 album “Breakin' Combs”. A year later she and Dred wrote and recorded her debut self titled album for Capitol Records but soon after, the urban music department disbanded and her contract ended up in the hands of Loud/RCA.

Alongside Erykah Badu’, “Baduizm”, Adriana and her album with it’s jazzy vibe, had the unique distinction of being responsible for ushering in what would later be dubbed the “neo-soul” movement. Rising to the heights of success on the backs of hip-hop groups like Mobb Deep and The Wu-Tang Clan, Loud Records was essentially a “rap label” and regrettably, ill equipped to properly promote and market such a revolutionary release.

Critically acclaimed yet commercially panned, (only 70,000 units sold) Adriana became disenchanted with the politics of the music industry and retreated to the warmth and freedom of the independent scene. Seven years later, her sophomore album, “Nomadic” was released on her own label to be sold only at shows and on her website… until now.
Animatedcartunes proudly re-issues this hard to find classic enhanced to include a music video for the lead single, “7 Days”. The album is a departure from her jazzy self titled debut in that it draws it's inspiration from many genres of music including samba, reggae, rock and hip-hop but all VERY soulfully composed. It is an extremely unique sound that defies description and can only be truly understood when you give it a listen.