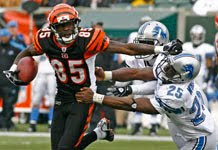 Chad Ochocinco changing his name to “Hachi Go”
I love Chad Johnson's antics. He's comedy and though his comedy is probably a little too much for the NFL, his antics get attention. The one thing Chad Johnson is not, is a trouble maker off the feild. So whether it's Ocho Cinco or Hachi Go, I'm still going to be a fan of his, but I will call him what his Momma calls him, Chad Johnson.

Ocho Cinco is a fool, but he can play some football and he's not a trouble maker off the feild.

I LOVE THIS DUDE. Did you know he has a children's daycare called, "Child Please"? He walks around the daycare yelling, "Child Please" to the kids. Hilarious. The funny part, most of the children who attend are children of his teammates.