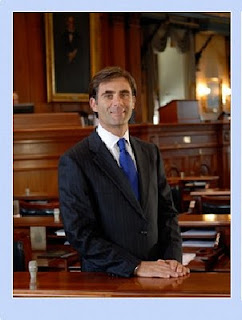 South Carolina Lt. Governor Andre Bauer recently made remarks in which he compared those chronically dependent on welfare to stray animals who beg for food. As I watched the CNN anchors and commentators last night who were attacking Bauer as a racist for his comments, I paused in awe with a smile on my face. His comments weren’t racist at all. Those comments were bonehead and ignorant, but not racist. Here’s a fact, in this country there are more white people in this country than any other race. Therefore when we talk about welfare and public assistance we have to look at this very fact, that public assistance assist white people more than any other race in this country. So that’s why I was in awe when the anchors and commentators on CNN were calling Bauer’s statement racist? Could it be because he compared people on welfare to animals? Maybe that’s it.


I will agree with the Lt. Governor that, government welfare often produces a dependency which could last for generations. I’ve seen it often when I was working for social services in New York City. Was his comment racist? I don’t know and I’m not quick to call him a racist, but because he made this statement and no matter how insensitive it was, he is allegedly racist—and by extension so are all conservatives also. Next time, choose better words Andre. Here are his comments:

“My grandmother was not a highly educated woman, but she told me as a small child to quit feeding stray animals. You know why? Because they breed,” Bauer said during a speech advocating that the government take away assistance to those who do not pass drug tests.


“You’re facilitating the problem if you give an animal or a person ample food supply,” Bauer added, according to a report in the Greenville News. “They will reproduce, especially ones that don’t think too much further than that. And so what you’ve got to do is you’ve got to curtail that type of behavior. They don’t know any better.”

Bauer, who grew up in a working-class family, said parents whose children receive free, or subsidized, lunches at school should stop receiving government benefits if they do not attend parent-teacher conferences.
Posted by Cheebs at 9:48 PM

I totally agree with you on this one. Nothing racist about his statement, but I will say because people associate welfare with black people, then it comes off racist. He probably was trying to be racist, but not knowingly considered the amount of white people on assistance when he made that statment. Just my thoughts.