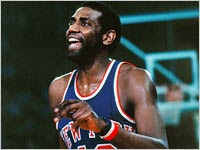 The NBA players of today have one person that they need to thank, Mr. Spencer Haywood who took his argument all the way to the Supreme Court and won his case. He went to junior college, but didn't complete his degree because he went on to the ABA. But after his ABA experience he had to fight his way into the NBA, because he didn't have a college degree. He was the one that open the way for players who were ready for the NBA, to enter without a college degree. Read his story and how the league will honor him next week in Dallas for All-Star Weekend.
After 40 Years, Spencer Haywood Finally Gets His Thanks -- NBA FanHouse
Posted by Cheebs at 6:59 AM