Shouts out to Eb_the_Celeb (www.ebtheceleb.com) for getting this up on Youtube. EB got the great live footage of Erykah Badu performing "20 ft Tall" & "Window Seat" from last night's so-called secret show in NYC. Well the streets are saying that Erykah did her thing last night and gave a heck of a performance. One thing is she has is some eager fans. Fans that are eager to hear her songs of love, poliTRICKS, and faith. This woman who is probably 'The Queen of NeoSoul' also has her fans eager to see her perform. Who knows where, she’ll perform next. Right now, it’s Miami, but with Ms. Badu, you never know. No tour dates yet, but you know they’re coming. Thanks to ST's contributor LeRoy McCarthy for the info. Erykah Badu's new album, New Amerykah Part Two:Return of The Ankh drops this Tuesday, but you can pre-order on iTunes. We've heard the album here at ST and we believe this album is a CLASSIC and a must have. 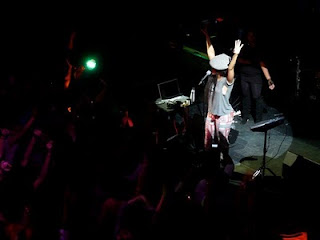 Ms. Badu is the best. Thanks for the post. Can't wait 'til she comes to the D.