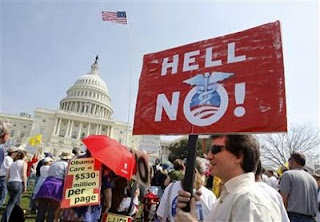 "This is what change looks like," Obama said moments after the history was made. Summoned to success by President Barack Obama, the Democratic-controlled Congress approved historic legislation Sunday night extending health care to tens of millions of uninsured Americans and cracking down on insurance company abuses, a climactic chapter in the century-long quest for near universal coverage.

If so many presidents before Obama tried to get heath care reform, why are so many people objecting it? The president asked for congress to do their jobs and go to work for the people. "Get this reform done" were his comands. So now the senate has no other choice, but to go to work for the American people. I think so many people are opposing, becuase they don't know or care to know the facts. Well I found an interesting column and if you don't understand the facts, read the articel and see if it helps you understand. If the people we voted in do their jobs, this should be a good thing for the people of the US.
http://www.nydailynews.com/news/national/2010/03/21/2010-03-21_whats_truly_sick_is_insurers_greed__callous_neglect.html
Posted by Cheebs at 9:52 PM