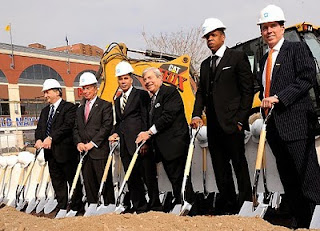 Even in this photo the Jigga Man has his 'Hardhat tilted to the side'. A little swagger and a great face for Brooklyn youth to look at what could be. This is big for NYC, but even bigger for Brooklyn. Think about the Mets and Yankees rivalry they have now. Or back when the Dodgers were in Brooklyn, they were right up there with the Yankees. That's the mission of majority owner Bill Ratner and the other visionaries of the ownership team. Personally I think it's great for NYC and a great look for Brooklyn. I think it's going to build a great rivalry and create more excitement for basketball. Just like the Dodgers, the Nets would get a lot of fans, and just like the Yankees, the Knicks will get a lot of fans.
Minority owner Jay-Z will be "even more" involved with running team in the future, a good sign for Nets fans since the superstar rapper is close with LeBron James, who is expected to become a free agent this summer. Hold on though Brooklynites, because I doubt The Knicks or The Nets are going to land King James this off-season.
Jay-Z has been involved since the day the Ratner team bought the Nets. Whether it is advice on players or advice on marketing, aside from being a great musician, he's a great business person and he is expected to stay quite involved with his investment.

After more than six years of delays and legal wrangling, Ratner's Atlantic Yards project finally got underway yesterday when a groundbreaking ceremony was held in downtown Brooklyn. The Nets' new arena, the Barclays Center, is the centerpiece of that project and is expected to be the most modern facility in sports.