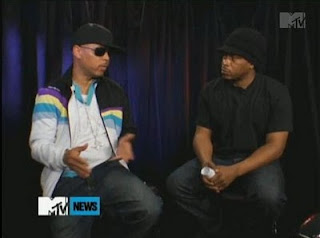 Let me just say that ST tries very hard to stay away from the BS. However, ST is a huge fan of GangStarr and when I say GangStarr I'm speaking of Guru and Premier. ST will put out what the streets are talking about and the streets seem to be talking heavy on this one. Our friends over RyhmesWithSnitch.com have put together MTV's Sway interview of Solar. Sway goes in with the questions and Solar seems a little reserve hiding behind shades. Sway asks Solar the question that has been wondering in people minds, "Were Solar and Guru and item?" According to "The Hollywood Street King" they were. ST went on record to say that we seriously doubt the authenticity of Guru's last statement and we were not the only ones. We did think it was kind of strange for Solar to try to have a "private" burial service for Guru like he's Guru's parent or worse, a lover. Check out this interview and you be the judge.
http://www.rhymeswithsnitch.com/2010/04/solar-kind-of-admits-he-wrote-letter.html
Posted by Cheebs at 9:33 PM