GRAB ONTO YA SEAT AND HOLD ON TIGHT; WHILE I TELL YOU A STORY ABOUT….THE BLACK DYNAMITE SOUND ORCHESTRA

If you haven’t seenBlack Dynamite

, it’s a 2009 spoof of the Blaxplotiation films of the 1970’s. Along with this movie was the resurgence of the music from the era; that good ol’ funky soul music. The music your daddy used to pop into the 8-track! The difference is this: ADRIAN YOUNGE & THE BLACK DYNAMITE SOUND ORCHESTRA are all original works from a "young(e)" and gifted man who is only 30-something with an old soul. With the exception of a few tracks, Adrian Younge did the original score released on the Wax Poetics record label where the producer of the film gave Younge the freedom to create and make it do what it do-and that he did. Pulling from influences such as Curtis Mayfield, Jackson 5, and Wu-Tang, Younge played all the instruments for the tracks using vintage tape recording equipment and sent them to be digitally transferred for our listening pleasure and came up with the sound so original-you would think it was actually recorded back in the day. 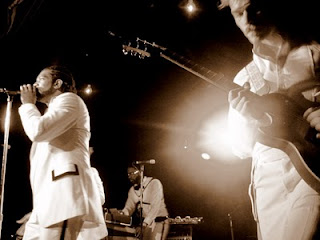 I had the honor to attend their first NYC performance at Southpaw in Brooklyn on June 18th and BDSO absolutely delivered. The members of BDSO (some jamming with each other since their high school days) consist of Adrian Younge (Hammond Organ, Fender Rhodes, Clavinet, Baritone Sax, Roland SH-2000, Fender Bass, and Flute), Alfredo Fratti (Rhythm Guitar, Lead Guitar, Sitar Guitar, and Flute), C.E. Garcia (Hammond Organ, Fender Rhodes, Roland SH-2000, Fender Bass, and Flute), Jack Waterson (Drums & Percussion), Loren Oden (Lead Vocals & Fender Rhodes), and Mike Wait (Rhythm Guitar & Lead Guitar, Fuzz, and Sampler). I wanted to include the instruments they play because their live shows are really something to be seen with the members of the band switching instruments throughout the show displaying their talent and raw soul-genius. After the show, I had the pleasure of meeting a few members of the band members and they all were just real, down to earth, cool peoples who love doing what they do-and that’s making the music they love for people just like them-who look back at that era of music with affection, nostalgia, and respect.

definitely one you want to add to your collection as it is destined to become a classic. Future projects include a forthcoming release from Wax Poetics (yet untitled) and some pre-production work for the Black Dynamite Cartoon pilot. Aside from BDSO, all of the talented members stay hungry with each working on their own side projects. BDSO is based out of LA but are adding shows nationwide throughout the summer into the fall-so keep your eyes peeled!! It is only the beginning for this up and coming band bringing true funk and soul back to life! DIG THAT JIVE TURKEY????!!!!
Article and picture by ST Contributor ISABEL"Issa" MARCANO
Click here for BDSO's website
Click here for BDSO's upcoming shows and for booking info:
Posted by Cheebs at 1:13 PM