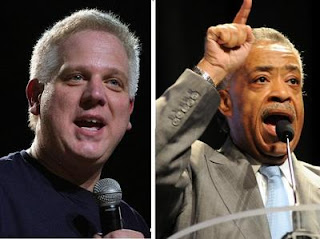 Let me say this......."I DON'T CARE IF THERE ARE BLACK PEOPLE IN THE TEA PARTY!!!" Now with that said, let me say that this new 'Tea Party' is nothing new at all. If this was a real party instead of a spin-off of The Republican Party than the question of, "Where was this Tea Party when Bush was in office?", wouldn't be a relevant question.  Since this Tea Party was no where to be found when Bush was in office, this let us know exactly what kind of party they are.

Now this clown Glenn Beck wants to disrespect Dr. Martin Luther King's honor by having a Tea Party rally on the anniversary of Dr. King's Lincoln Memorial, "I Have A Dream" speech at the same spot where King delivered his speech. Now I ask, "Does this Tea Party have the same vision as Dr. King?" If your answer is, "no", then anything other than a loving, melting pot message is being disrespectful. I haven't heard anyone representing this new 'Tea Party' speaking of love & peace. I never heard anyone say, "One of these 'Tea Party' members should win a Nobel Peace Prize". In other words, I don't care how these Tea Party (Republican Party spin-offs) members put it, they are nobody's leaders and HATE is not the crew to follow.

"It is just an outright attempt to flip the imagery of Dr. King and the imagery of that march, and distort it for some opposite purposes", said the Rev. Al Sharpton, president of the National Action Network, which is hosting the "Reclaim the Dream" rally in Washington, D.C. at the same time as Beck's "Restoring Honor" event. "They're not talking about celebrating Dr. King, they're talking about circumventing him and distorting him", says Sharpton.

Of course the National Association for the Advancement of Colored People, the National Urban League and the National Action Network, will hold events to commemorate King's legacy and the March on Washington and hopefully it will outshine the HATRED coming from this new 'Tea Party'.
For more read here.....
Posted by Cheebs at 12:00 PM