Ron Isley and Lauryn Hill-"Close To You" (Audio) 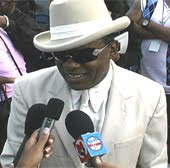 was the first one to grab this summer's biggest buzz getter, put her in a studio, and put out some music. The two did a remake of The Carpenters

classic, "Close To You". Mr. Biggs and L Boog both have lovely voices and together.....DAMN. This single is said to be on Isley's new album, Mr. I, slated to drop at the end of November. Give it a listen and Enjoy.