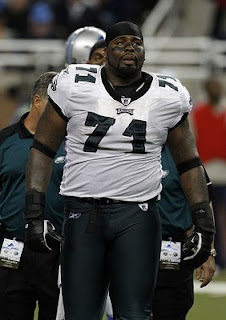 Can you imagine playing your favorite tune in the car a little too loud and costs you $628? Well Philadelphia Eagles' tackle Jason Peters had to post $628 bond after being arrested in Shreveport., La., for violating the city's loud music ordinance and resisting arrest.
Police spokesman Bill Goodin said Monday that Peters refused to show his driver's license after police stopped him Saturday night because of the volume of music coming from his vehicle. The charge of resisting arrest was added because of Peters refused to show his license to officers.
Posted by Cheebs at 8:16 PM

Well, if he was in Houston, we already know that he would've never made it On The Slab.

I hope you will keep updating your content constantly as you have one dedicated reader here.