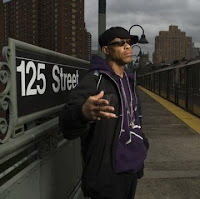 A year ago from today Hip Hop lost one of its favorite people for the culture of Hip Hop, Keith Elam

He was a poet who just happens to rap, he was a Morehouse Man, and his wordplay can be compared to some of the best in the business. He wasn't the first rapper to infuse the genre of Jazz into his music, but he was one of the best Hip Hop artist to ever to incorporate the genre of Jazz into his music. The same way he became a student of rhyme, Hip Hop, and its culture, he became the same student when it came to Jazz music. He studied and sat down with some of the living legends from the genre before he came up with his Jazzamatazz series that pushed Hip Hop into the history and culture of Jazz. No one combined these two music forms better. Its because of that and his wordplay, that he will always be remembered. Rest In Power Keith Elam/G.U.R.U.  My favorite Jazzmatazz

joint below. Two of my favorite music artist together.
Posted by Cheebs at 7:39 AM