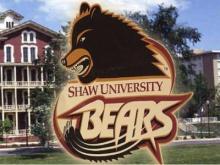 I have a sister who recently relocated to Raleigh, North Carolina a little over two years ago. She's the primary caretaker of my mother, so my mother has since moved to NC, but still calls NY home. I called my sister yesterday after the storm and I thanked the heavens that, her nor my mother was injured in any way and to top it off, her property wasn't damaged, but some of her nearby neighbors properties didn't make it through the storm.

I also have a neice who relocated form NYC to Raleigh, NC back in 2000 and a tree fell on her front lawn and would have hit her car if she would have parked where she usually does.

When a natural disater hits, it affects a whole community no matter what race, creed, color, or salray rage, a natural disaster affects us all.

I want to THANK GOD for sparing my mother and sister and I want those affected by this storm to know, MY THOUGHTS AND PRAYERS ARE WITH YOU.

Here is footage of the damaged done to Shaw University. The video was taken by Shaw University students. Shaw University may have to shut down for at least a year. The school and its pride was on a rise as the Mens and Womens Basketball Teams both are currentt CIAA Tournament Champs. My prayers are with the students of Shaw University and the school family.
shouts out: NewsOne
Posted by Cheebs at 3:33 PM