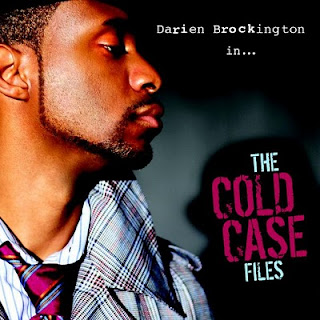 If you 'FOLLOW' ST then you know about Little Brother, The Foreign Exchange,  Rapper Pooh, and Phonte'. This NC crew is full of music and full of talent. Darien Brockington or "D-Brock" as he is called by his crew, has a sultry voice and his voice is heard on many of the Little Brother/Justice League cuts. Well D-Brock is set to drop a mixtape right before the year ends as a prelude to his album, which is set to drop in the beginning of 2010. I just got my hands on a copy of the mixtape yesterday and have been listening to it since. Be on the look out for D-Brock as he is a hidden talent in this pool of music. I became a fan of his from his first lp, Somebody to Love. Give it a listen and be on the lookout for the upcoming album. Trust me, you won't be disappointed.
http://dbrockmusic.com/
Posted by Cheebs at 10:15 AM

FYI: It's D-Brock not Block and The Cold Case Files is a mixtape; his 2nd album will drop in 2010.

I appreciate the feedback. When my fingers were hitting the keys I was thinking D-Brock, but my fingers were thinking Block. Maybe it was the Styles P cd I was listening to the day before. Oh well corrections made. Just wanted to get the news out to my peeps. And please come back.

All good, hun. I'm all about spreading the word :)
I'm a part of Darien's team and happen to pass through. I'm excited for the mixtape release tomorrow and his 2nd album next year!
The masses must hear about the good music out there!

I love D- Brock. I'm from VA and I'm a big fan of the Justice League and Little Bother. That's where I first heard D Brock, then his last album was beautiful. I made all my girls a bootleg copy and they loved it. This good looking brother with a smooth voice is on the rise and I am one of his biggest fans. I got the mixtape and my ears are wet for the album.