Tyra Banks to End Talk Show After this Season

As Jay Z would say, "On to the Next One" and with that said Tyra Banks is cutting the talk. The former supermodel told People.com that she is ending her popular daytime talk show, The Tyra Show, in spring 2010. 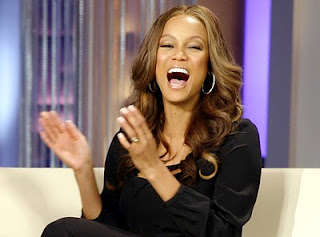 "This will be the last season of The Tyra Show," Banks told People.com. "I've been loving having fun, coming into your living rooms, bedrooms, hair salons for the past 5 years."

I personally think she got out at the right time. She will go on to do other things, but it's good to go out on top. Her show was a success and she's ending it before some people call it corney. Congrats on five years of great talk Ms. Banks.
http://www.nydailynews.com/entertainment/tv/2009/12/28/2009-12-28_tyra_banks_ending_the_tyra_show_popular_talk_show_will_end_after_this_season.html
Posted by Cheebs at 10:01 AM