Thanks For The Boondocks Aaron

Just like The Boondocks, Skelle Top is Back after a LONG HIATUS!!!!

I thought animated people never died and last forever. Well it appears that The Boondocks creator, Aaron McGruder, will put an end to one of the best adult, satire, animated comedy series ever made for television.
I could date the show’s length by my daughter’s age. She’s 18 now and when The Boondocks first aired, she was 11. How can I time a show by my daughter’s age you may ask? Well, when she was 11, we had a discussion about the, “R. Kelly” episode a day after it aired. 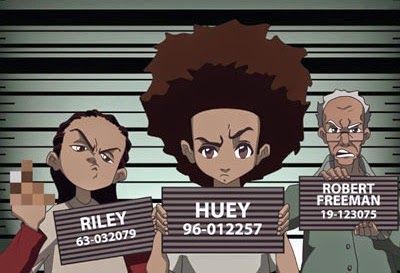 I was turned on to The Boondocks Comic Strip by a friend that attended University of Maryland at College Park with McGruder. From the moment I was introduced to the comic strip, I became an immediate fan. Years later I had a daughter and The Boondocks Comic Strip was in our local newspaper. I used to give it to my daughter so she could read the strips. As soon as we were enjoying the daily comic strip, for whatever reason, it stopped running in our local paper in Houston. Maybe it was too ‘edgy’, I don’t know, but I do know the strip didn't run in the paper again. However, the strip was still printed in the paper back home in New York.

I eventually moved back to New York for work while my daughter and her mother stayed in Houston. When I was in New York, I would mail my daughter The Boondocks Comic Strips that I cut out from the paper. Soon, the strip stopped running in the New York paper. Not too long after that, there was a rumor of the strip coming to life by animation.

I would call my daughter frequently while I was living in New York and we talked about The Boondocks debut leading up to the show. I missed the first episode because I was working, but the next time I was on the phone with my daughter she told me, “Daddy. You got to see The Boondocks. It’s funny. You’ll like it”.

After receiving rave reviews from my daughter, I knew I could not miss the second one. I set my recorder to tape the second episode just in case I forgot to adjust my life to the Adult Swim calendar. I didn't miss the second episode and was amazed
at what my eyes had just seen. I had to rewind and watch it again. The episode was about the R. Kelly Trial which was going on at the time. The show was time-written and attacked an issue that was the talk of the streets within the Black community. Not only was it the talk of the Black community, it was worldwide news. But this episode took a punch at those who valued R. Kelly’s music more than the law. Things that were pointed out in this episode were some of the very things I had scrambling through my head; somehow those same thoughts I had were put into satire in a creative and talented way.

The next time I called my daughter, I asked if she saw The Boondocks and she quickly responded, “Yes. It was funny”. I asked her if she learned anything from the episode and she said, “Yes. I learned that it doesn't matter if R. Kelly makes good music, he shouldn't have done what he did.”  I asked her what else she learned and she boldly said, “No matter what our people do, we have to love our people. But Riley was happy that R. Kelly didn't get in trouble. I thought it was funny when he told Jazmin’s Daddy, ‘If someone was to pee on me, I’ll get out of the way and I’m only 8’. Daddy, he’s too smart to be 8”.

As the first season went on, this became our topic of discussion whenever the show aired. I read reviews of the show and how some thought it was ‘too risque’. For example, The “MLK” episode where several reviews attacked the show and its creators for having MLK use the “N” word. As I watched the episode, I wasn't too comfortable with the “N” word being so freely used, but at the end of the show I understood why it was used. Some may not agree with me, but one of my favorite Lauryn Hill lyrics is on the Fugees track Zealots, “And even after all my logic and my theory, I add a motherfucker so you ign’nant niggas hear me”. Meaning, in today’s society with certain individuals (and I must state “niggas” in this context doesn't mean Black), a curse word or two may be necessary in order to get the point across. And whether it was right or wrong is not the point, the subject matter is the point and the point was made because it got people, even ‘ign’nan’t people to talk.

The next day I phoned my daughter and we talked about the ‘MLK’ episode. I asked her what she learned. Her confident 11-year-old response to her father was, “Martin Luther King didn't get his ass busted and thrown in jail, so we can look stupid dancing and partying”. I was in awe. I was surprised that she felt comfortable to use the word, ‘ass’  with me as she had never used a curse word in my presence. Her mother and I allowed her to watch the show, so I guess we had to take whatever she got from it. Since my daughter felt comfortable using the word ‘ass’ with me, as a former educator I took this opportunity to see what lesson she got. I simply asked her, “So why did Martin Luther King get his ass busted?” Her response was simple and innocent, “So we can have freedom”.

Animated characters are supposed to last forever. I mean Bart is still that same kid after all of these years and I want Riley and Huey to last a lifetime. However, I understand if it must come to an end. Monday night will be the beginning of the end as the final season starts. My daughter is now going on 19 and a freshman at St. John’s University, studying media. You can bet your last dollar we will be tuned in for every episode that airs. And of course, like we did 8 years ago, we will discuss the pros and cons of the show. So for that I say, “Thanks Aaron” and may you have continued success with whatever direction your creative style takes us. The Boondocks won’t be the same without you.

“As the world now knows, The Boondocks will be returning for a fourth season, but I will not be returning with it. I’d like to extend my gratitude to Sony and Adult Swim for three great seasons.
I created The Boondocks two decades ago in college, did the daily comic for six years, and was showrunner on the animated series for the first three seasons. The Boondocks pretty much represents my life’s work to this point. Huey, Riley, and Granddad are not just property to me. They are my fictional blood relatives. Nothing is more painful than to leave them behind.
To quote a great white man, “Hollywood is a business”. And to quote another great white man, “Don’t hold grudges”.
What has never been lost on me is the enormous responsibility that came with The Boondocks – particularly the television show and it’s relatively young audience. It was important to offend, but equally important to offend for the right reasons. For three seasons I personally navigated this show through the minefields of controversy. It was not perfect. And it definitely was not quick. But it was always done with a keen sense of duty, history, culture, and love. Anything less would have been simply unacceptable.
As for me, I’m finally putting a life of controversy and troublemaking behind me with my upcoming Adult Swim show, BLACK JESUS.
AM”-via Facebook

Let me say this in my Huey Freeman voice, “Power to the People!!”, and continued success Brother. New season starts this Monday, the 21st, on Adult Swim.
Posted by Cheebs at 1:16 PM